On a cold February day in 1964, an unknown musician named Paul Simon penned the words to a song that would initially be a commercial failure and lead to ridicule from many bands.

One year later the song was rediscovered by a Boston radio station and quickly hit #1 on the music charts. Fifty years after, it was added to the National Recording Registry in the Library of Congress for being “culturally, historically, or aesthetically important.”

The haunting D♯ minor song in question is The Sound of Silence. A tune poignantly punctuating humans’ inability to truly communicate with one another.

Firmly ensconced on the altar of worship at the song’s center shines the focus of our adoration - captured by this incisive couplet:

And the people bowed and prayed
to the neon god they made.

Extending the lyrics into course-speak, we’re referring to the ego and all its projections.

The attention-grabbing radiance of all our attachments beckon awareness. Each desire, every grievance, all concerns burn with neon brilliance.

Money, health, relationships, stature, reputation, ability - all the neon gods we made - have but one purpose: to perpetuate our belief in separateness.

Of course, we don’t see it that way.

We innately believe there are things in the world that can make us happy. A certain amount of money, adequate bodily health, fulfilling relationships, sufficient entertainment and stimulation, and so forth.

And thus we spend every moment of the day either in the pursuit of such pleasures or in the contemplation of them. An unending hedonic treadmill of unfulfilled desire.

Until we step back and ask ourselves, “Is this the only way?”

Then we open to the possibility that we’ve got it all wrong. As we read in A Course in Miracles:

Unless you are sick you cannot keep the gods you made, for only in sickness could you possibly want them. (T-10.V.3)

The gods we made do not serve us at all. Each “prayer” we beseech of them once again reinforces the ego belief in duality, separate interests, and, above all, a denial of heaven.

Recognition of this leads to transformed experiences. In which we hear the “still, small Voice for God” that is “whispered, in the sound, of silence.”

Join me in Thursday’s class where we’ll explore the neon gods we’ve made, and how we can redirect attention to the one God of infinite peace. I look forward to seeing you then. 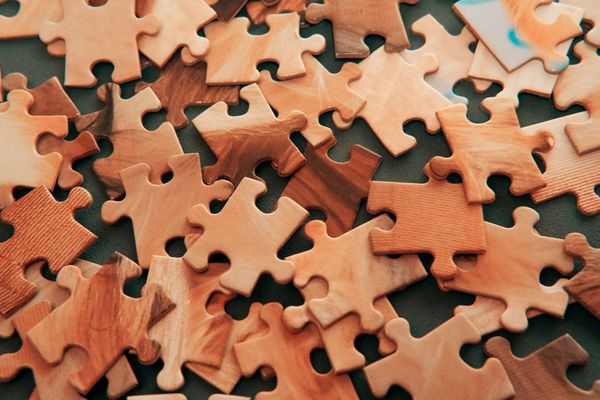 With all due respect to Forrest Gump, life is more like a jigsaw puzzle than a box of chocolates. Some pieces are easy and enjoyable to connect while others frustratingly

Before the days of pervasive GPS, when driving to new destinations I would often get lost. It wasn’t that I had a poor sense of direction, rather, my stubbornness