Let’s Make a Deal was a popular game show when I was young. While the show never captured my interest, I was inspired by contestants willing to risk everything they had won for the chance at a much larger prize.

Quite often they failed, and lost it all.

Playing the lottery is an inverted version of that gaming framework. A very small risk for, once again, the chance at an incredibly large jackpot.

Of course, most often it fails and once again, we lose.

Whether we lose big or lose small, it’s tempting to buy into the concept of giving up something for the chance at great riches.

Which appears to have its ontological roots in how we seemed to come into existence.

As we read in spiritual frameworks such as A Course in Miracles:

Into eternity, where all is one, there crept a tiny, mad idea [that we could be separate from oneness.]

And what led to this desire to detach from oneness?

The goal of individuality. Specialness. Uniqueness.

It’s as if Monty Hall himself proposed: “You can keep heaven and all it represents. Or, you can risk it all for a chance at self-ness. The opportunity to be a 'me'. To have your own existence.”

To which we jumped up-and-down in our clown suit screaming, “Yes! Yes! Yes!”

So we go on to play. And for a very brief moment it seems as if we’ve won. The prize of selfhood is ours. Yet the celebratory satisfaction sours quickly.

What did we actually win? A body born in pain, suffering through existence a short while, only to die.

It’s more like we got the goat behind curtain number three.

And for this we gave up everything.

But what’s this? Monty has returned to the stage with an announcement. Seems there’s been a mistake.

Turns out we did not forfeit our inheritance. It was a silly game-show programming snafu that made it seem as if we had given up eternity.

Thankfully we can breathe a huge sigh of relief. Nothing happened. We still have it all.

The only remaining challenge is this: the attraction of selfhood looms large over our collective psyche. And thus, while Monty has retired to the hallowed halls of Hollywood heaven, we still experience his beseeching ghost: “Keep what you have, or risk it all to maintain your individuality.”

In every moment we make that choice. And all too often we opt for certain loss having thought “a brand new car” might be the panacea. Until we finally realize, there must be another way. But not another game-show. Not another relationship. Not another lifetime. Rather, another way of looking.

When we change the way we look, everything we look at changes. All our experiences are instantly transformed into peaceful occurrences. We do this by shifting who we look with. Instead of looking with self-hood as our guide, we choose the attendant of oneness. All the riches in the world pale in comparison. And that’s the very best deal we can make.

Join me in Thursday’s class where we’ll explore these concepts in greater detail, including how we can practice channeling our inner Monty Hall to always make the right choice. I look forward to seeing you then. 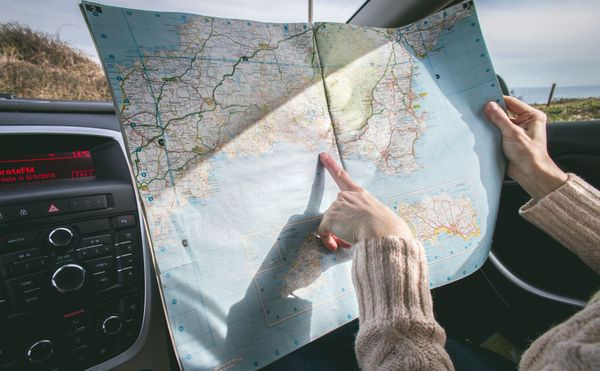 Before the days of pervasive GPS, when driving to new destinations I would often get lost. It wasn’t that I had a poor sense of direction, rather, my stubbornness

Do you brush your teeth in the morning? How about when you go to sleep at night? Well, if you’re like most of the world, you partake of the